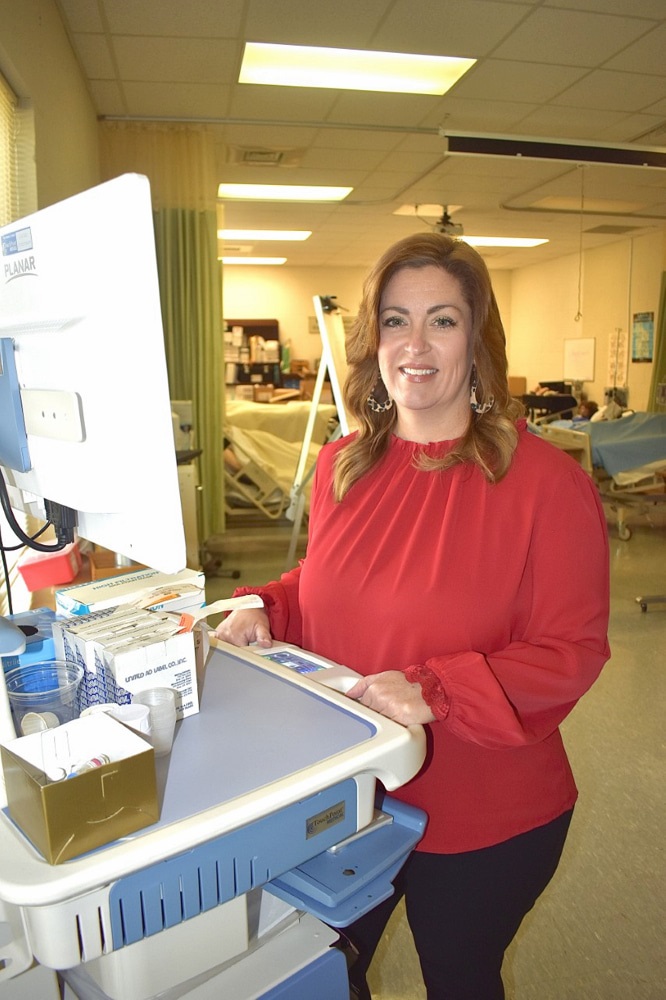 “I am excited about our nursing program for the coming year! Enrollment has increased, and we are pleased to have welcomed 18 new students to the first level nursing program this fall,” states Futrell.

With over 20 years of experience in nursing from bedside, to teaching, to quality improvement, Futrell has served on the faculty of the R-CCC nursing program for over four years. She previously worked as a nurse in the ECU Health (formerly Vidant) system at the former Pitt County Memorial Hospital and at Roanoke-Chowan Hospital in Ahoskie.

Originally from Pennsylvania, Futrell grew up in a small, grape-farming town on the shore of Lake Erie, where she says the high school mascot is a Grape Picker, and the town has views of vineyards and wineries in every direction.

She came to North Carolina to attend East Carolina University (ECU), where she later received a master’s degree in nursing education. She received her bachelor’s degree in nursing from the University of Pittsburgh in Pennsylvania. Today she lives in Murfreesboro with her husband and two children, a daughter in high school and a son studying at ECU.

“I chose nursing because as a teenager I witnessed a Home Health and Hospice nurse guide and assist my grandfather through sickness and death,” she says. “I knew then that I wanted to be able to have a similar impact on others.”

Futrell says her ‘favorite moment’ as a nursing educator so far is when she witnessed an elderly gentleman hold the hands of two young nursing students to pray with them for their success in the program so they can touch lives the way so many nurses had touched him.

“R-CCC has an outstanding faculty of full-time and adjunct master’s and bachelor’s level nursing instructors with diverse areas of expertise and countless years of experience at the bedside,” states Futrell. “With the current nursing shortage, especially in rural areas, it has never been more important to train qualified registered nurses to enter the healthcare field.”

Her experience as a nurse at the local hospital is paying off because of the ‘great working relationships’ already established.

“Our local hospital is so supportive of this nursing program, providing clinical experiences and shadowing We are fortunate to have such a great collaborative relationship,” says Futrell who feels that her directorship was ‘meant to be’ due to her nursing experience and relationship with local hospital leadership.

Calling the community college both progressive and transformative, Futrell describes one innovative new method she incorporated for reviewing for nursing exams.

“We implemented a fun and creative competition by dividing the class in half and testing their knowledge with a type of quiz game. Small prizes are given for the students with the most success in the game,” she explains. “It’s a great competitive and fun way to determine where students are strong and where they might need to focus their studies.”

“After a lengthy career in nursing at the bedside, I discovered my love of education, and that there is no greater reward than helping someone achieve the goal of earning “RN” behind their name so that they can help others the way I have been able to do,” concludes Futrell. “Our community deserves great nurses and I am honored to play a role in helping to make that happen.”

For more information about the Associate Degree Nursing Program at R-CCC, visit www.roanokechowan.edu. R-CCC Where Community and Careers Connect #DiscoverRCCC